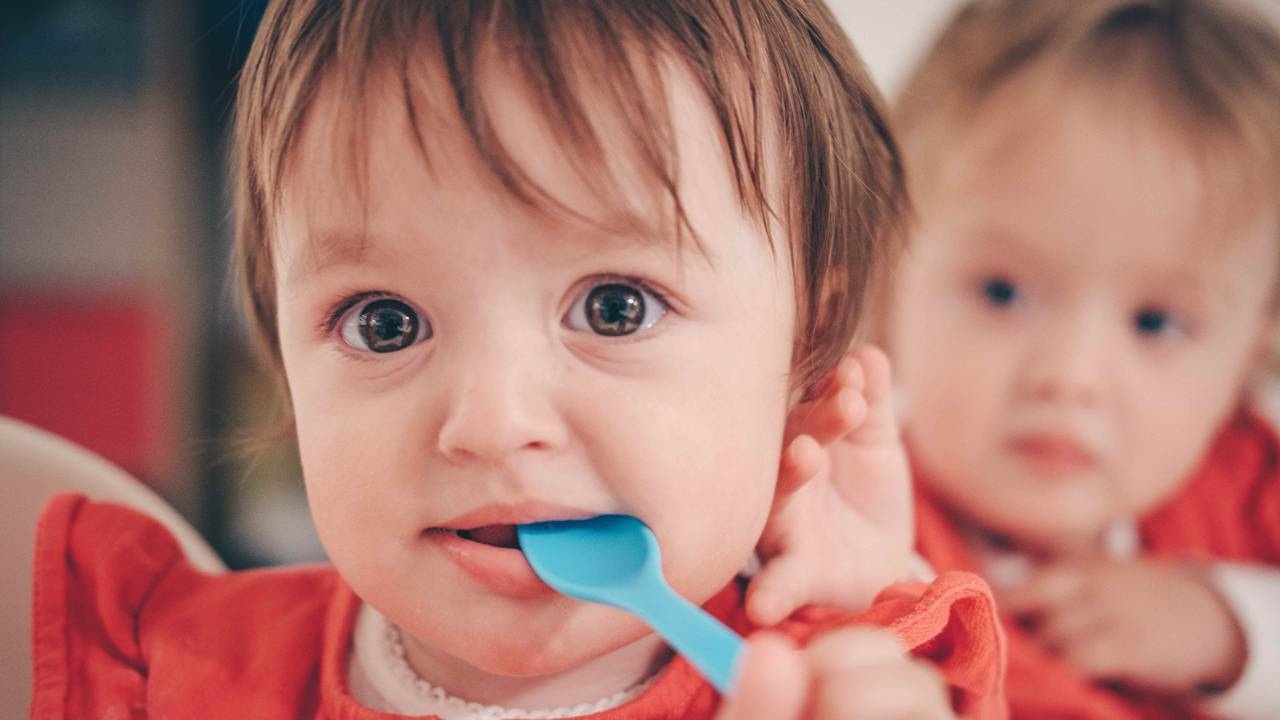 I never dreamed I'd have twins. I'd been friends with twins, heard cool things about twins, read about twins fiction and not... but somehow bringing twins home from the hospital gives the concept of twins a life its own... and makes me wish I'd had some twin hacks before I'd started.

Suddenly those foolish lines ("Oh, are they twins?" "Are they identical?") or those probing questions ("Are they natural?" "Did you have a C-Section?") are all too real - and directed at me. Well, if you must know, yes, no, yes, yes. In that order.

The one thing people will protest about is, "No, but they really look exactly the same! Are you sure they're not identical?" Um, yeah, actually. They look no more alike than me and my brother 3 years younger than me. Siblings, to be sure, but not identical.

Those questions call to mind my favorite twin line of all time - from the first book in the Harry Potter series:

“Fred, you next," the plump woman said.

"I'm not Fred, I'm George," said the boy. "Honestly, woman, you call yourself our mother? Can't you tell I'm George?"

"Only joking, I am Fred," said the boy and off he went.

Humorous, but clearly written by someone who neither was nor had twins. I can totally see one of my twins doing that when they get a bit older... but can't see myself falling for it. At all.

One of them, inevitably, is going to be a bit more of a sensitive sleeper than the other (remember - they aren't the same person!). Keep an eye on them - try to pinpoint which one it is, and make sure to cater to her sleep needs more than that of her twin.

So, for example, if one wakes up a 15 minutes after the other and they have, say, a 3 hour awake limit put them in for the next nap based on when the sensitive one woke up. Make sense? All right, then, on to the next one.

Twin Hack #2: Begin with the end in mind.

Keep away from building habits that are going to keep you up all through the night for months or years down the line. So that means if you don't want to spend all night rocking them for the next 12 months (or more!), keep away from that pattern from the start. I WISH someone had told me this before my twins were born... my night nurse spent the night holding/rocking them for the first 4 weeks until I realized that if I wanted to get any sleep after she left, something was going to have to change!

At any age. Doesn't matter where you are in the game - building good sleep skills now (though hard for the first bit of time) is going to mean a happy, rested momma and family for the next 18 years, till they go to seminary or yeshiva or get married or just move away. If you've got newborns, there's a TON you can do to get them started - check out these blog posts for more info:

How Young Can I Teach My Baby To Sleep?

If you've got bigger kids, you're probably a bit more desperate; but don't worry - this is TOTALLY doable! This is a great blog post for mastering bedtime:

I know, you don't think of your 6 month old born 4 weeks early as being 5 months... but when it comes to sleep, that's how it works.

Think of it like this: most of sleep skills and abilities revolve around brain development. So there's the 9 months in utero that we calculate up to "0" and then we start counting from birth. But if your little folks needed (or wanted!) to make an early appearance, then they had to use those first couple weeks of life to bring them up to "0".

So my twins, born at 37.5 weeks were (later-term) preemies for 2.5 weeks, and then newborns for 3 months, so we didn't expect them to be able to sleep through the night till they were 3 3/4 months (humans have the neurological capability to sleep for 12 hours straight from 3 months and on. But more on that another time.)

I happen to harbor a severe dislike of schedules - especially with kids. Forget about days being unpredictable - hours are unpredictable! After all, we're all human, right?

Right, but. In order to keep everyone in the house sane, you've got to keep your twinnies on a quasi-similar schedule. If A is ready for that nap transition, but B isn't, hold out a little while... and then plunge! A woke up, and B is still sleeping? Well, whoever said "Don't wake a sleeping baby" clearly never had twins!

It's OK to give a bit of leeway when it comes to over-sleeping naps. If your twins are on a 4, 3 or 2 nap schedule, though, try to keep them synchronized by waking the second one approximately 15 minutes after the first wakes. (If it's been a short nap, you can leave the first one in for those 15 minutes to see if she'll fall back asleep - sometimes it works!).

Twin Hack #7: Feed them together.

Since feeding is such a central part of our routine during the first year or so, it's crucial to keep the daytime feedings synchronized to line up the day. If you're breastfeeding, once they're ready to tandem, I loved this pillow and was able to use it without problem till they were taller than 30 inches. If you're bottle feeding or both breast and bottle feeding, I've heard great stuff about this one.

For night feeds, our goal is to let them sleep as long as they can. So when one wakes, don't wake her other. I know, it's tough. Really really tough. Have your hubby do the late night feed with a bottle while you sleep before the early morning feeds, if you can.

Just keep in mind - it pays off. It really really does. When they have the skills to fall asleep independently, they can build cycle upon cycle to get all that lovely consolidated sleep - and that is what's going to teach them to sleep through the night once they're ready for it.

If you want to have any idea of what your nights look like, write it down. If you don't, it all turns into one big blur. (My clients with singletons tell me when they don't write it it becomes a blur; and they wake up half the number of times we do!) Don't use an app because the blue light your phone screen emits can wreak havoc on both of your sleep patterns. Just stick to good old paper for this one.

Network with other twin moms who've been through this before. Whether for sleep, solids, potty training, diaper blow-outs or anything else - we're a tribe and we've got to stick together.